“Stage director Dean Anthony succeeded in bringing a visual realization—often with striking synchronized and mirrored motion among the singers—to the rich verbal and musical interaction of Cipullo’s intimate operatic masterpiece.” 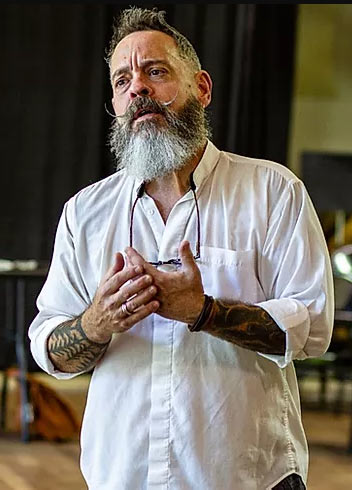 Dean Anthony draws inspiration and expertise from a comprehensive career spanning over 30 years and innumerable turns as performer, director, educator, and producer.

Frequently engaged as a stage director, Mr. Anthony’s artistic process is hallmarked by an energetic, gritty, and physical style. His portfolio stretches across the repertoire from Le Nozze di Figaro to Dead Man Walking and includes regular engagements at regional houses across the United States. Mr. Anthony’s 2019-2020 season began with Glory Denied with Union Avenue Opera and continues with collaborations with Knoxville Opera, Opera on the James, Opera Tampa, Opera Delaware, and Opera Omaha. A major producer and promoter of new works, Mr. Anthony has helped facilitate the development of numerous projects including Tom Cipullo’s Mayo, J. Mark Searce’s Falling Angel, a workshop of Robert Aldridge’s Sister Carrie, and Change the World, It Needs It! a new cabaret with the Kurt Weill Foundation. In collaboration with composer Michael Ching, Mr. Anthony produced and created the opera Speed Dating Tonight!, which garnered nationwide attention and has been booked for over 75 different productions to date.

Mr. Anthony is currently the Director of Opera with the Janiec Opera Company at the Brevard Music Center and has served on the Brevard faculty since 2008. A passionate educator, he has shared his insights through a unique movement and acting masterclass series at opera companies, universities, and music festivals the world over from the Boston Conservatory of Music to Festival Lyrique de Belle Ile en Mer.

As a character tenor, Mr. Anthony performed over 100 roles on the operatic stage and garnered acclaim for his keen vocal, dramatic, physical, and acrobatic abilities, earning him the nickname “The Tumbling Tenor.” Some of his most praised portrayals include the roles of Puck in A Midsummer Night’s Dream, Little Bat in Susanna, and Bardolfo in Falstaff. He has graced the stages of companies across the globe from Vancouver Opera to Theater des Westens in Berlin, while frequenting North American venues including L’Opera de Montreal, San Francisco Opera, and New York City Opera, among others.

Mr. Anthony is also esteemed for numerous television appearances from his celebrated turn as Daniel Buchanan in Francesca Zambello’s Street Scene, to the world premiere of Robert Greeleaf’s Under the Arbor and An Evening of Gilbert and Sullivan with The Boston Pops on PBS. He is featured in the Grammy-nominated recording of Amahl and the Night Visitors, produced under the NAXOS label.