“Vocally, Mr Davila put in a robust and hot-blooded performance, undaunted by the house or the circumstances.As Don José, Mr. Davila showed off a burly, dark-hued tenor. He was especially convincing in his character’s impetuous and anguished utterances, which he emphasized with an appealing plangent ping.” 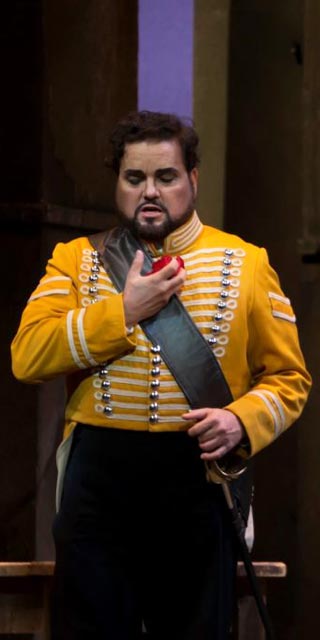 As Don Jose in Carmen.

With an international career that expands for more than 20 years and 60 roles, tenor Rafael Davila recent important engagements include Don Jose in ​Carmen​ with the Metropolitan Opera in NY, Renato Des Grieux in ​Manon Lescaut​ at Barcelona’s Gran Teatre del Liceu and under Maestro Placido Domingo’s baton for Opera de Valencia in Spain, the premiere of Jimmy Lopez’s opera ​Bel Canto​ with the Chicago Lyric Opera where he created the role of General Alfredo, ​Cavalleria rusticana​ and ​Pagliacci​ for Sarasota Opera, Teatro San Carlo in Naples, as well as for the Macerata Festival in Italy, and ​Don Carlo, Carmen, Norma ​and​ La Forza del Destino​ for Washington National Opera.

This season he has been a member of the Metropolitan Opera artist’s roster for the third consecutive year in the productions of ​Aida, Carmen ​and ​Tosca,​ and is performing these last two operas as well for opera Naples and Opera de Puerto Rico respectively. His Don Jose has also been heard in Minnesota, Miami, Kansas City and New Zealand.

Next season he makes his debut with San Francisco Opera in ​Manon Lescaut,​ returns to Sarasota Opera for Catalani’s ​La Wally​, and also debuts with Opera Colorado and Opera San Antonio as Mario Cavaradossi in Tosca,​ a role he has also sang in Kansas City, Sarasota, Miami, San Juan and Leipzig in Germany.
For the 2020-21 season Rafael will return to the Metropolitan Opera in NY to sing the leading tenor role in performances of Verdi’s ​Nabucco.

Other highlights in his career include the title role in Verdi’s ​Otello​ for Sarasota Opera and Teatro de la Opera in Puerto Rico, Radames in​Aida​ for Opera de Valencia and Manitoba Opera in Canada, Dick Johnson in ​La Fanciulla del West​ for Michigan Opera and Minnesota Opera, Manrico in ​Il Trovatore​ for Opera New Jersey and Lyric Opera of Kansas City, Riccardo in ​Un Ballo in Maschera​ for Teatro San Carlo in Italy and Florida Grand Opera, the premiere of the opera ​Time and Again Barelas​ by Miguel del Aguila with the New Mexico Symphony Orchestra and Calaf in ​Turandot​ for Opera de Puerto Rico, Connecticut Grand Opera and New York Lyric Opera.

Rafael has also appeared in the leading tenor roles of the operettas ​Die Fledermaus​ and ​The Merry Widow​, as well as in the Spanish zarzuelas, ​Luisa Fernanda, El Huesped del Sevillano​, Venezuelan zarzuela ​Alma Llanera,​ and the Cuban zarzuelas ​María La O and​ Cecilia Valdés​.

His recordings of Ariel Ramírez’ ​Misa Criolla​ as well as the recording of the operetta​Cofresí​ by Rafael Hernández were both nominated for a Grammy Award.

Rafael began his musical training at the Puerto Rico Music Conservatory completing later a Master’s degree in Opera Performance at the University of Texas at Austin.