“The highlight of the cast was the bubbly Lamparilla of Peter Joshua Burroughs” ​​​
Charles T. Downey, washingtonpost.com 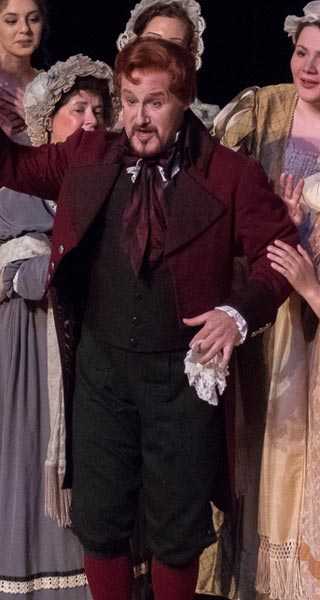 As Triquet in NLMF’s production of Eugene Onegin.

Critically acclaimed as a “commanding” singing actor, tenor Peter Joshua Burroughs’ career has carried him to the stage in opera, zarzuela, and musical theatre alike. He has frequently been heard on the Washington National Opera stage in such roles as Ezekiel Cheever in The Crucible, Don Curzio in Le nozze di Figaro, Remendado in Carmen with Denyce Graves, and Spoletta in Tosca, among others.

A natural comedian, Peter has appeared in many comic roles such as Archibald Grosvenor in Patience and Nanki-poo in The Mikado. For his portrayal as Lamparilla in Barbarillo de Lavapiés, he was described by DC Theatre Scene as “terrific…his comic abilities were well matched with good singing form”.

Mr. Burroughs has performed recitals in many of the prestigious halls of Washington, D.C., such as the embassies of Venezuela, Canada, Germany, Austria, and Hungary, the Corcoran Gallery of Art, the Philips Collection, the Library of Congress and the Department of State.

This season, Peter performed the role of Paco in La Vida Breve with IN Series, where he will also perform as Loge in “An Evening of Wagner and Liszt” in the Spring.