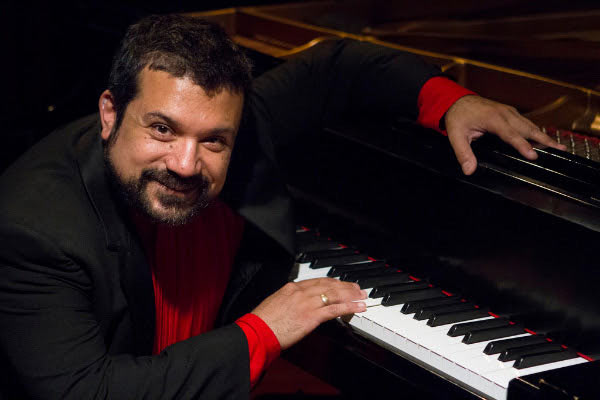 A musician of brilliance and versatility, Carlos Cesar Rodríguez has gained recognition as a virtuoso pianist who not only generates excitement in the Hispanic and Spanish repertoire but also displays an extraordinary flair for Mozart, the romantics and the avant-garde scores. He has recorded for Omicron and Brioso labels and has won the highest critical acclaims for his CD of Spanish music, España en el corazón, distributed by Brioso Recordings. An expert on early instruments as well, enjoying entree to the Smithsonian Institution’s rare collection, Mr. Rodríguez was chosen by the Smithsonian to perform during the 300th year celebration of the Piano by the museum. He was also invited to participate in the 150th anniversary celebration of the Smithsonian Institution. Mr. Rodríguez has won acclaim moreover as music director of Mozart operas and Zarzuelas (Spanish operas), and as a composer, arranger, and improviser of ballets, Spanish dance scores, and Latin-Jazz/Pop compositions.

As concert-pianist Carlos Cesar Rodríguez made his recital debut in his native Venezuela at age 5 and made his orchestral debut as soloist at age 11. Soon after he arrived in the United States to continue his music studies, Mr. Rodríguez was a finalist in the New York Philharmonic Young People’s Competition. At age 21 he made his Weill Recital Hall at Carnegie Hall debut. As concert-artist he has toured Europe and performed concerti and solo recitals throughout the Americas. Venues in which Mr. Rodríguez has performed include the John F. Kennedy Center; the White House; and the Corcoran Gallery in Washignton DC; Merkin Hall, Carnegie Hall, the Americas Society in New York; the Mozarteum in Salzburg, Austria.

As chamber music artist Mr. Rodríguez has become a regular guest artist with the Garth Newell Chamber Music Festival. As collaborative artist he has worked with Jessye Norman, Denyce Graves and Plácido Domingo.

As conductor, Carlos Cesar Rodríguez has performed throughout the Americas. In 2005 he was chosen as award recipient of the prestigious Georg Solti Foundation US fellowship for outstanding young conductors. With the encouragement, mentorship and collaboration of Maestro Plácido Domingo Mr. Rodríguez became founder and coordinator of the Zarzuela Program (Spanish Operetta) of the Domingo-Cafritz Young Artist Program with Washington National Opera in 2002 and continues to serve in this capacity. In addition he continues to be sought after as music director/conductor of Zarzuela Productions in the USA and the Americas.

Mr. Rodríguez earned his Bachelor’s degree with Clifton Matthews (Mr. Rodriguez’ mentor) from the North Carolina School of the Arts, his Master’s degree from the Juilliard School of Music with Joseph Kalichstein, and his Doctor of Musical Arts degree, conferred summa cum laude, with Thomas Schumacher at the University of Maryland.
Recently Mr. Rodríguez has performed as piano soloist/conductor with Sinfonica NOVA in Gershwin’ s Rhapsody in Blue (the 1924 version) and was music director/conductor for the opera I Pagliacci and the Cuban Zarzuela Maria La O with the In Series as well as for the production of W.A.M II: Mozart’s Two Operas Don Giovanni and Cosi fan tutte, viewed in settings combining singers and dancers with The In Series and the Washington Ballet in Washington DC.