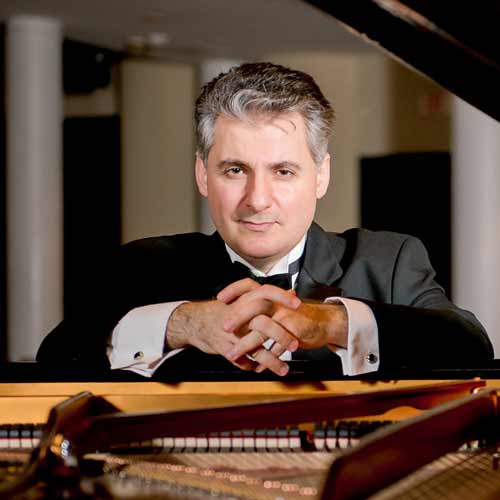 Pianist Edisher Savitski has enjoyed critical acclaim throughout his career: “As each of Savitski’s convulsive trills and ominous chords would hang in the air, it became clearer that indeed something special was happening. We will be lucky to hear Scriabin played anywhere near this powerfully any time soon” (Jack Walton, South Bend Tribune). “The piano of Edisher Savitski prays, laments and also makes joyful sounds; This amazing Georgian simply takes off to the sky!” (Hanuh Ron, Yediot Akhronot, Israel).

In November 2007, Dr. Savitski became first pianist to performed from his home in South Bend, Indiana on Yamaha Disklavier piano that was connected to another Disklavier piano in the Recital Hall of Yamaha Artist Services International in New York City, in an unprecedented live performance/press conference.

Dr. Edisher Savitski’s performances have been frequently broadcasted on live TV and radio throughout Europe and USA. In 2007 Savitski’s CD was released on Schubert Club’s Ten Thousand Lakes label. He is a Yamaha Artist.

Born in Tbilisi, Georgia, Dr. Edisher Savitski studied in central music school with Maya Beridze and later in the Tbilisi Conservatory with professor Nana Khubutia. During this time he became a prizewinner of the international charity program “New Names”, Russia, and won collaborative piano competition arranged at the Tbilisi State Conservatory.

In 1998 he joined the renowned Alexander Toradze Piano Studio at Indiana University South Bend, where he earned Masters degree, Artist diploma, and has been awarded with the Performers Certificate. In Spring 2013 he earned a Doctor of Musical Arts degree in performance from Michigan State University.

Currently Dr. Savitski is an assistant professor at the University of Alabama School of Music.