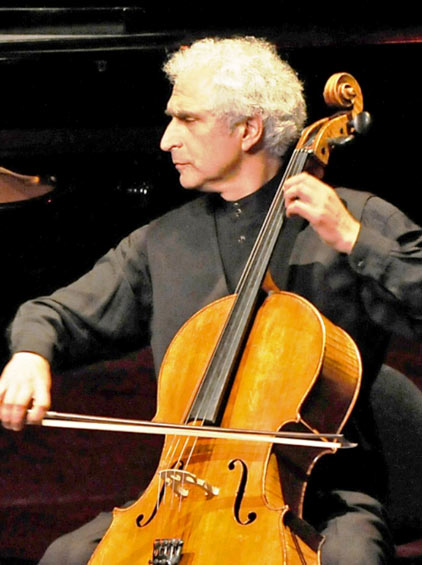 Respected around the world, Latvian-born cellist Yosif Feigelson enjoys a solo career spanning over three decades. He has been compared to such cello greats as Rostropovich and Piatigorsky, and praised for his marvelously singing tone, effortless technique, and sincere, enlightening interpretations.

As a child, Mr. Feigelson was virtually surrounded by music: his father, an opera tenor, his mother, an orchestra violinist. He began playing cello at the age of six, studying under Don Yaffe at the Darzins Music School in Riga. After winning First Prize at the Concertino Prague International Competition (1970), he struck the interest of legendary cellist Mstislav Rostropovich and consequently became his pupil at the Moscow Conservatory, continuing his studies with Natalia Gutman. Prizewinner of the prestigious Tchaikovsky (Moscow 1974) and J.S.Bach (Leipzig 1976) competitions, he toured throughout the former Soviet Union and Eastern Bloc countries, appearing among other major venues at the Great Hall of the Moscow Conservatory, Dvorak Hall in Prague, and Musikbienale in Berlin.

Mr. Feigelson made his widely publicized New York orchestral debut in 1988, when he stepped in on a short notice to substitute ailing violinist Nathan Milstein with the New York Chamber Symphony. Thereafter, he has performed at every major hall in New York City, as well as Symphony Hall in Chicago, Kennedy Center in Washington, D.C., and other major venues. He was guest soloist with the Pittsburgh Symphony, Detroit Symphony, Seattle Symphony, Chicago Symphonietta, Brooklyn Philharmonic, Richmond Symphony, Charleston Symphony, and Knoxville Symphony among others. In 1990, the cellist received the Avery Fisher Career Grant given to outstanding instrumentalists.

In Europe, Mr. Feigelson has taken numerous tours of France, Germany and other Central and East-European countries, including participation in the Schleswig-Holstein and Handelfestspiele festivals; Tuscany Festival in Italy, Musiktreffen in St.Moritz, Switzerland; Bach Festival in Madeira, Portugal; Rostropovich and Summertime festivals in Latvia, and many orchestral and recital performances in the United Kingdom, Austria, Netherlands, Czech Republic, Israel, and the Baltic countries. Mr. Feigelson was also featured on TV and radio, including NPR’s “Performance Today”. His 1996 performance of the Dvorak Cello Concerto with the Detroit Symphony under Neeme Jarvi was recorded for Eurobroadcast and heard on radio stations around the world.

The cellist’s repertoire boasts more than 50 works for cello and orchestra, an equal amount of sonatas, and variety of music including his own transcriptions. A fervent advocate of unjustly overlooked music, he made a 1996 world premiere of Mieczyslaw Weinberg’s unique 24 Cello Preludes and subsequently recorded it along with composer’s Four Cello Sonatas; available today on Naxos label. In addition to performing, Mr. Feigelson has offered master classes for string players and ensembles at the Aspen Festival, Chautauqua Institution, Detroit Civic Orchestra, Rutgers University, Waterloo Festival, and other venues in the U.S. and abroad. He is a Founder and Artistic Director of Kindred Spirits Arts Programs, Preludes of Pont-Aven and The Stravinsky Circle.